This was my 3rd attempt at making a custom DL-44 blaster out of a WW2 Mauser.  This time I used a CM712 instead of the smaller C96 pistol.  It is a little bit larger and works well to fit my finger on the trigger while wearing gloves.

As you can see in these pictures (descriptions will be below photos), my original blaster was based off of a C96 Mauser.  There are different aspects I gained from using this version to create my custom blaster and that I would learn to modify my next blaster.  The CM712 Mauser seen behind my original blaster is slightly bigger.

My first step was to remove these hydraulic connectors from the hoses I got at an army surplus store in Shelly, Idaho.  They were $6.99 a pop, and the actual fitting goes for about $40 bucks online brand new.  I cut off the tip of my CM712 and placed this tip on on the barrel.  It gives it a Star Wars kinda effect.

Next I got a 45 degree picatinny rail and heated up my scope mounts to go over the top of the rail.

I shortened the scope by a few inches to make it more screen accurate to the DL-44 blaster and mounted these rings onto the scope. 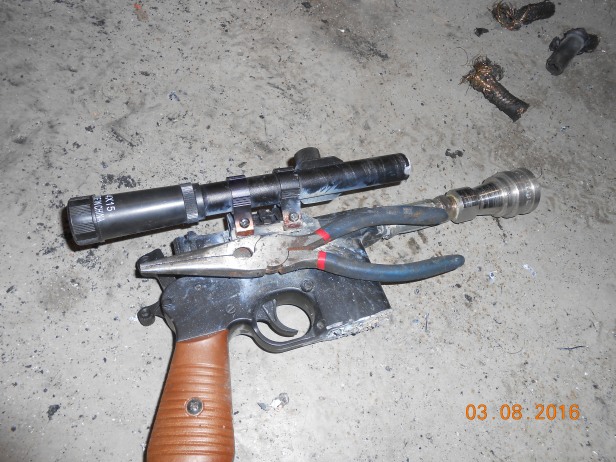 This is sort of how I wanted to mount my scope to my blaster (pliers on top of to hold in place for the photo).

A quick couple tacks with the welder and then it was time to use JB Weld to do the rest (since the CM712 is mostly aluminium/very thin metal).  I also added a threaded pipe that I had cut down to give the shape of the air cooling vents on the front of the blaster.

The JB Welding begins.  I added a small metal plate under my scope mounting bracket to push it up and away from the blaster a little bit.  I also used the nuts from the picatinny rail to adhere to my “mounting bracket.”

It feels good and looks close to the DL-44 blaster Han Solo uses in Star Wars.  A little bit of black paint mixed with rustic brown, gold, and gunmetal grey gives the blaster the weathering effect.

Overall pretty close and works well for my kit.

One thought on “DL-44 Blaster”