Robert got a Rubies 2-piece Jango Fett helmet off of Amazon (http://www.amazon.com/Rubies-Costume-Injection-2-Piece-Trooper/dp/B00IMWB3D6).  It isn’t the best helmet out there, but will save you money to start out with.  I personally saw the potential of a fiber resin helmet and ordered one from Head Shot Props (HSP) for durability in the long run after some warping on my Jango 2-piece over the summer.  It is a good starter helmet.

The first step with this helmet was to hide the seam and seal the 2 pieces together.  We used bondo to do that.

Letting the bondo set before sanding (it hardened too quickly in this heat and flaked off).  Also taped over the visor to prevent paint getting on it (probably should have popped it out completely as it needed to be a darker shade anyways). 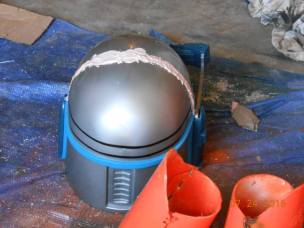 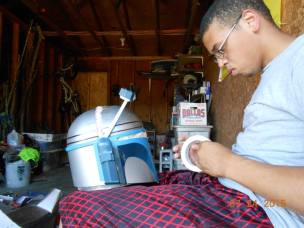 Sanding out the bondo along the seam of the helmet.  Then priming the helmet with metallic/chrome paint underlay. 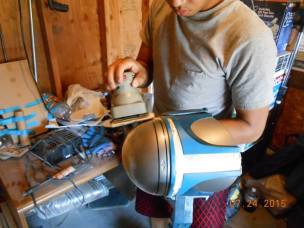 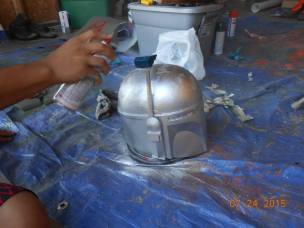 Robert getting ready to paint the blood red accents on his helmet.  Waiting for helmet and gauntlets to dry. 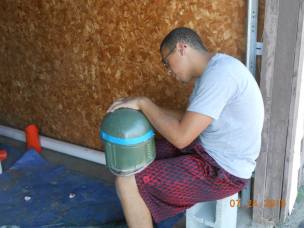 Robert with his bucket.  He added blood splatter across the dome of the helmet, which had to be removed later because it also looks like overspray. 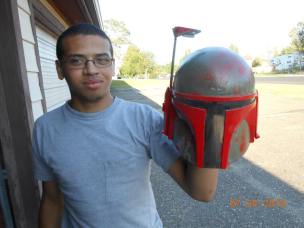 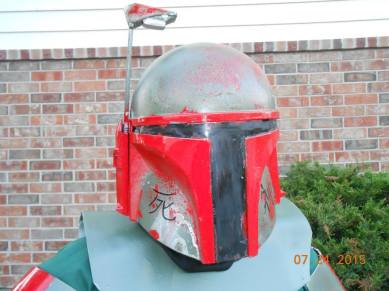 Overall the helmet looked really good and life moved on.  We went to an event at the local Zoo Boo for Halloween to test out our kits.  Robert rocked his kilt as we were non-official and doing it for fun (not a merc sponsered event).

The event received some attention and we even made it to the news.  KFYRT T.V. 3rd Annaul Zoo Boo at the Dakota Zoo in Bismarck.

Later we went to an armour party and got a shot of our buckets in a row.  Theses buckets are from those who were/are working towards official membership. 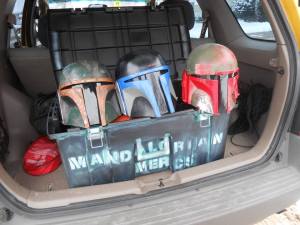 Months later and closer to Robert’s 18th birthday (you have to be 18 years or older to become an official member of the Mandalorian Mercs http://mandalorianmercs.org/get-involved/costume-requirements/) we started making things come together.

First off was to sand down Robert’s helmet to remove “blood splatter” also known as overspray. 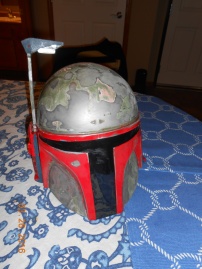 The sanding worked to his advantage as some of the red paint chipped off and revealed the ‘metallic’ underlay we used to prime the helmet back in July.  After it was sanded down, he applied tape to helmet before adding another primer coat of metallic paint. 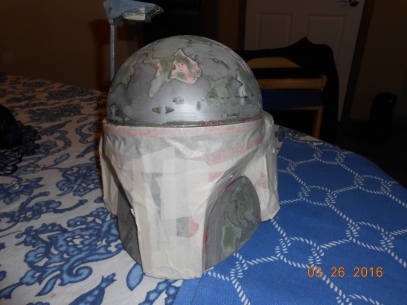 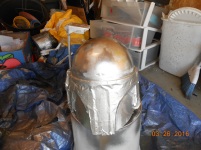 Painted the range finder black.  Then painted on the army green colour to the helmet.

Removed the tape to reveal the red. Still needs some work where the tape stripped off the red paint.  It took it down to the the original blue from the Jango 2-piece.  It will get touched up with some gun metal grey and rust colour before it is down with acrylic paint. 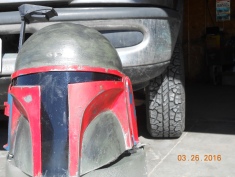 The helmet then got its detailing down with the added rustic look and gun metal grey undertones. 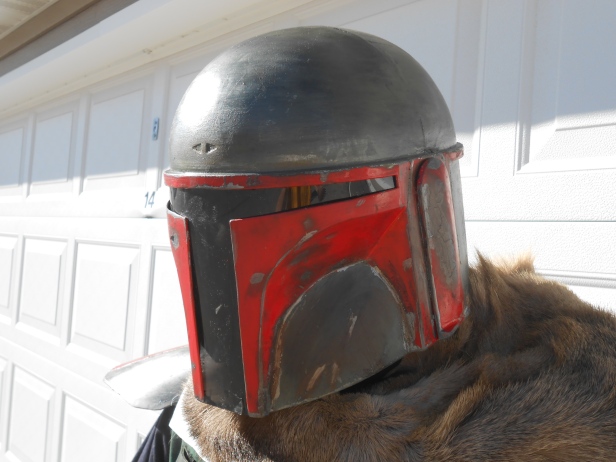