The decision to upgrade my armour has come.  It had been over a year of wearing my kit and I wanted to make some changes.  My old armour needed some work for straighter edges and I really wasn’t fancying the orange for my primary colour.  I made the change by printing out new templates, cutting out 16 gauge metal (an upgrade from my 20 gauge, little bit thicker), and then paint.

As you can see above my old orange armour was good, but not straight like the newly cut armour (also seen above).

Then came the paint.  I went with hunter green as my primary colour and used the hunter orange as my secondary colour (located on my knees, shoulder bells, and helmet).

Weathering the armour was the fun part.  I learned from my old armour that a butane torch makes awesome colourization and blaster marks on metal armour.  Unfortunately I had also learned that it melts velcro, so I made sure to do this step before adhering the velcro on my plates.  The blaster scorch marks really brought out some beautiful colours.

I also used acetone and charcoal for some of my weathering effects, similar to the marks found on my helmet (which were painted on with acrylic paints).  Thus making my armour weathered the same as the rest of my kit.

The weathering effect was well worth it and really made my kit come together (see above).  I also used velcro to adhere my armour to the existing velcro on my flak vest. 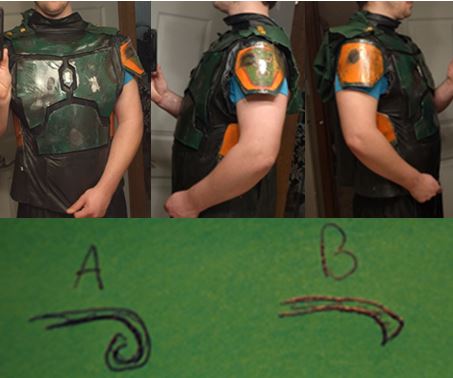 I then tried a test fit using the bathroom mirror and sent it to my clan’s Alor’ad and Ruus’alor for advice.  They said the armour looked too big on me and I decided to kit up to help me bulk out to full figure. 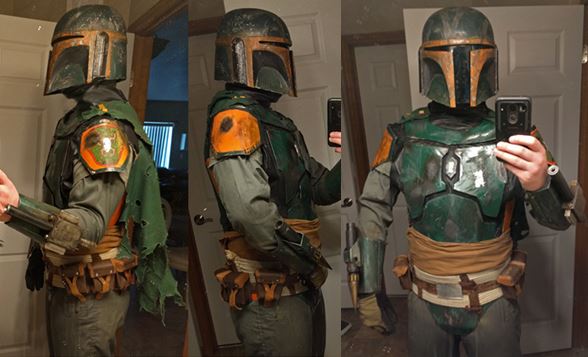 I also upgraded my cape to cover my whole back and shoulders.  I may have had too much fun with the torch, but was able to get the desired effect and weathered it the same as the rest of my kit.

Sometime later and when it was warmer outside I was able to roll the edges on my armour and get some pictures to see if my armour was back up to part with club standards.  I was given the go ahead, but had to swap out my center diamond for a bigger one. 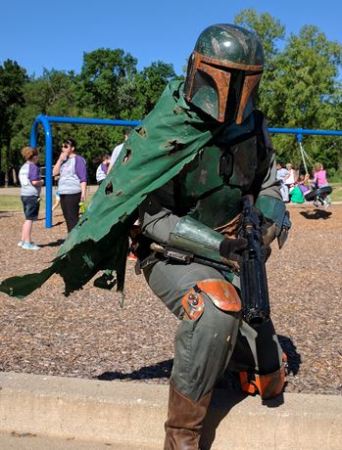 That weekend, I was able to wear my modern metal kit again to two troops.  I may have turned into an oven during my second troop while standing in the sun.

My kit has come a long way and I will probably continue to make improvements each year.  The most recent improvement was the use of my late crusader kit and custom smuggler kit boots/half chaps.  Approved by my clan’s Alor’ad as our Ruus’alor has moved out of the clan.  The boots are way nicer for walking in, especially in parades (as seen below Kritika and I in the Mandan July 4th Parade).