Got my Graflex flash handle some time in July 2016.  The flash handle comes from an old camera.  It houses 3 cell batteries in the stock (D-batteries).  On the top a bulb screws in and a dish is connected to the flash handle.  It acts as the flash for the handle. 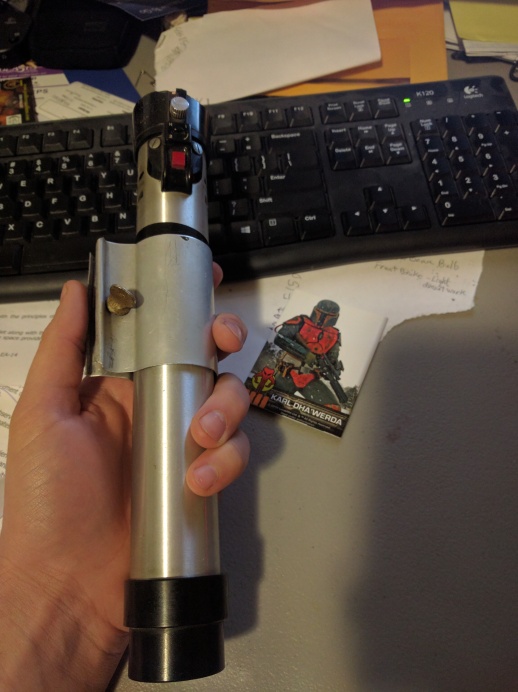 I tried using windshield wiper blades for the grips, but they didn’t work super well. So I bought some grips from The Custom Saber Shop (TCSS) in 2017.

I also got some coloured discs, d-ring, an end cap, and a 1″ OD green blade; in addition to the grips from TCSS in 2017. 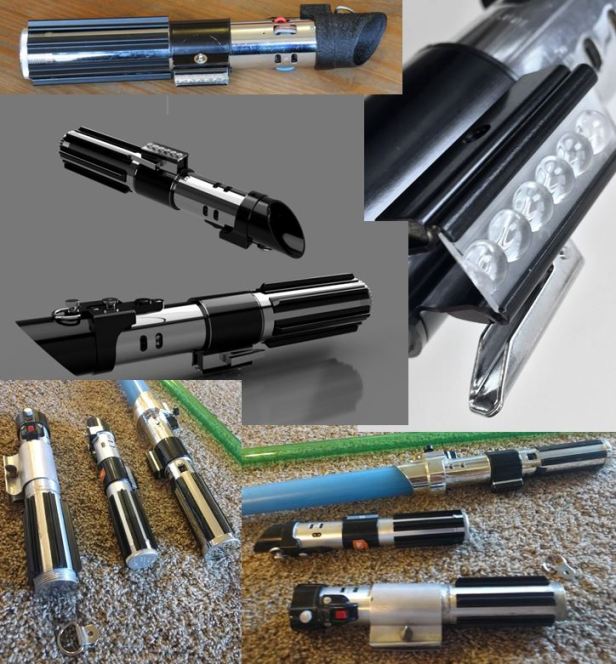 My inspiration mostly comes from Vader’s hilt with some modifications and a green blade.

I stuck a mag-lite on the bottom of the hilt and shined it up through the blade to get this effect.  Months later in December of 2017 I took up designing this lightsaber again. I got a strong LED flashlight and modified it to fit inside my hilt.  The blade was 40″ long when I got it but with the modification it became more of a 36″ blade.  The electrical tape around the blade was to hold it securely in the hilt. 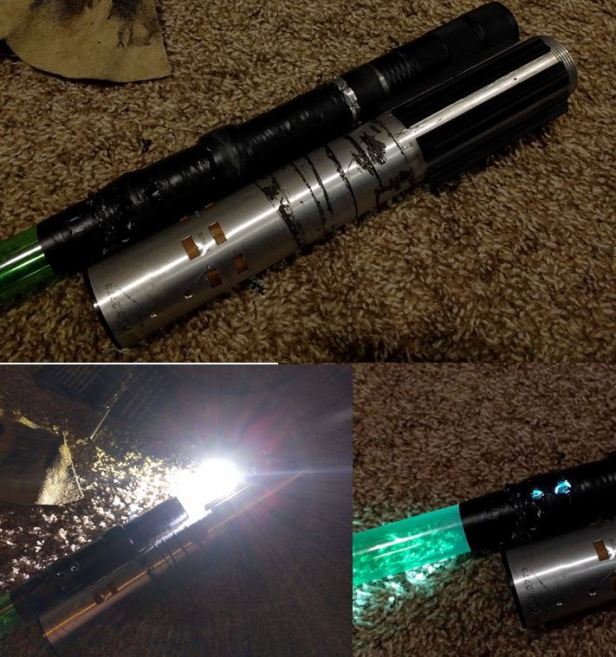 I then put the flashlight where it would go up against the blade.  Super bright LED flashlight.  This is what it looked like shining up into the blade (see above).

I sanded the blade itself to give more reflection to the light.  I super glued the dark green disc to the flashlight.

Still need to figure out how the saber would attach to my belt with the D-ring I got.  By popping the bottom cover cap off you could access the flashlight button to turn the saber on or off.

After searching for a Graflex clamp for my hilt I finally found one of the quality I wouldn’t mind on my lightsaber from The Graflex Shop in December 2017.  I also ordered a replica bubble strip, which snapped unfortunately on one of North Dakota’s bitter wintery days after opening it outside the mailbox. I used a soda can to put under the bubble strip with the logo facing down.  With the bubble strip in and some super glue, I clamped down the clamp.  I later JB Welded the clamp down, because every time I showed someone my hilt they immediately loosened the clamp.  Why people, why??  That thing too forever to line up and clamp down.

I also got a hilt shroud from Shapeways.com that fit on the tip of my hilt perfectly.

My lightsaber without the blade.  It is coming together. 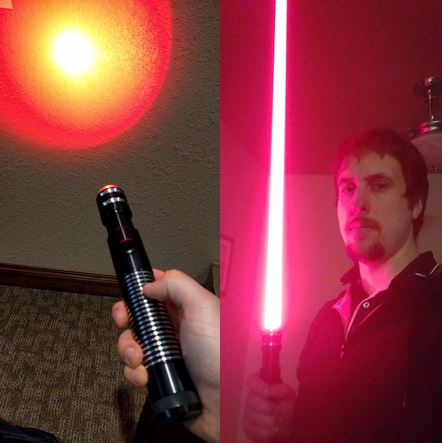 I got a mystery box from Ultrasabers for a $75 Christmas present.  I was interested in the quality of their sabers and how I would proceed  with my own build.  I am NOT impressed, it seems like these hilts were thrown together and components were shoved into a tube.  Everything rattles around in there.  I wanted my hilt to have higher quality components.

Conveniently we hired a new designer at work that recently quit Vader’s Vault down in Georgia.  Craig was originally hired because of his exploration of designing a new line of carbon fiber hilts.

Craig Nichols, Andrew Woods, and Kyle Kinghorn are the original founders of Bendu Armory – carbon fiber lightsabers.  I can’t wait to see one of these in person; the inside carriage seems to fit everything perfectly without rattling around.

This is a rough schematic of the wiring I will be doing for the light only on my saber. I will have a switch, batteries, LED, and some wiring to keep it simpler than this.  I have an LED Switch, so it is slightly different than the above wiring schematic. 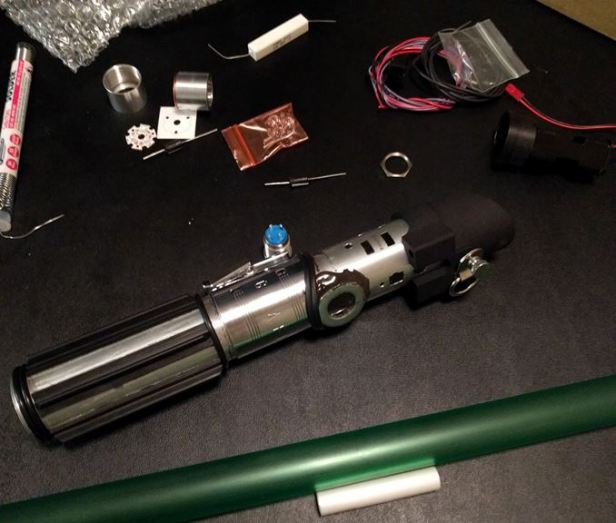 Some parts came in today from TCSS!!  I went over to Craig’s house to help me wiring my lightsaber together.

Wires soldered to the switch (16mm AV Style – DOT).  If I were to do this again I would get a shorter switch (like a 12mm); but I really wanted the light up LED ring with dot.  Really hard to move around in my hilt and screw the switch in.  I would also get a latching switch instead of a momentary switch.  Live and learn. 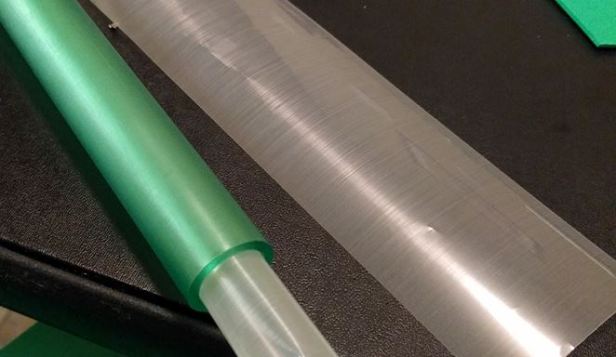 I also got some “corbin” reflective film to put inside my green blade. Rolled it up on a dowel and slide it in. Then cut off the excess material on each end.  I only got one roll of film and now wish I had ordered more for 3-4 wraps inside the blade.

Grinding down the blade holder to fit in my 1.35 ID graflex hilt.  It would have been mid-March before TCSS would have been able to turn it down on a metal lathe.  Since no one is going to see the outside of my blade holder down in my hilt; I used a grinder to do the same thing.  Shroud on my hilt.  Lined up the screw hole, then drilled through the blade holder & retention screw.   I then took my shroud screw and threaded the holes to fit both it and the retention screw. 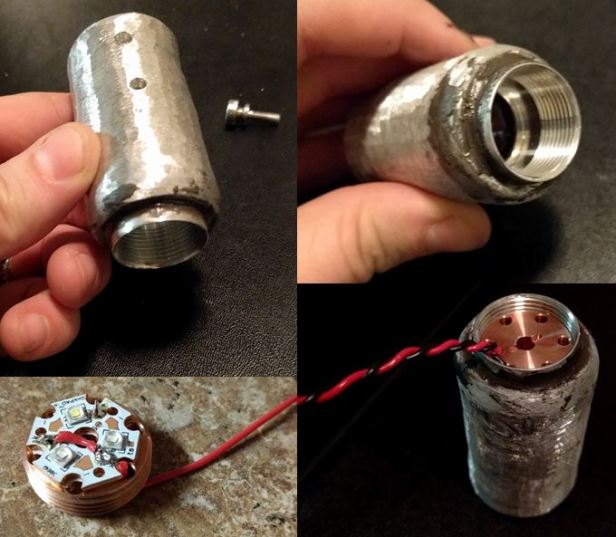 Wiring the battery pack on the bottom.  Blue switch with green LEDs for the blade.  I did the classic Luke Skywalker move in ANH and looked straight down the lightsaber and turned it on.  No wonder we have blade plugs for these; I saw a green dot for a few minutes.  Green 1″ blade. 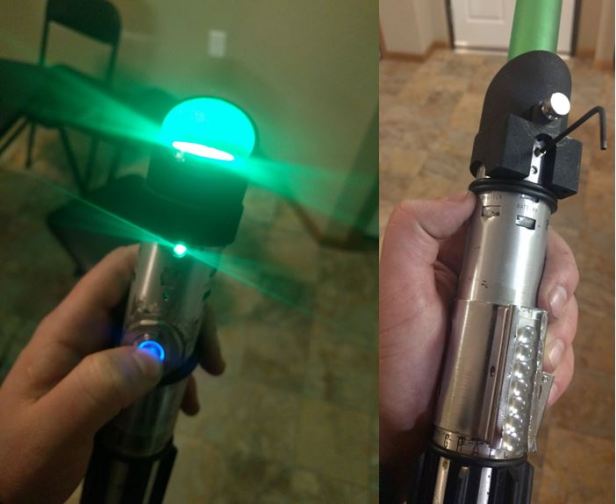 I placed the retention screw in a unique location out of the way and still efficient.

I’m a real Jedi now, built my own lightsaber (minus some electrical wiring help), hahaha. 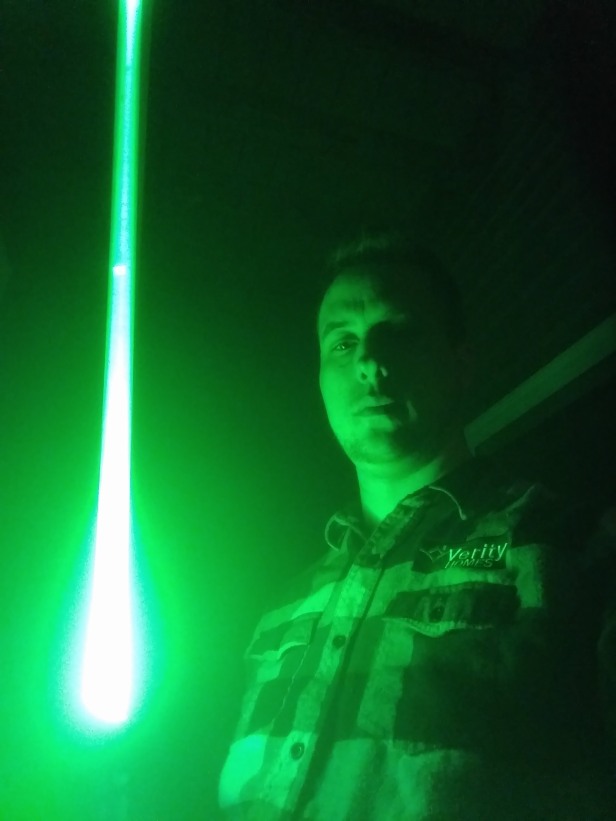 Green lightsaber for my next project a my generic Jedi kit for the Rebel Legion – Central Base here in North Dakota.

One thought on “Lightsaber”